I would say over the past year, I have been as miserable as I have been in my entire life.  I let self pity absorb and consume me.  I became the stories I told myself in my head.  My anxiety and depression became my veil.

I am just now starting to climb out of it.  Putting this into perspective, I want to share something that is important to me.

Crossfit has been a redemption for me.  When I switched jobs and had to do more physical labor, it set me back so much that I couldn't do much of anything.  I felt I had lost a part of my soul and had been cast into prison.

Two years ago today, I did a WOD (workout of the day) called 'Murph'.  Crossfit has these wods called hero wods that are named after service men and women (military, police, firefighters) who have died.

Lt. Michael Murphy was a Navy Seal who died in a firefight in Afghanistan in 2005.  His favorite workout was the following:

This is also the same WOD we do for Murph.

Two years ago, I tipped the scales at 180 lbs.  I did the whole thing, the running, the pullups, the pushups (none on my knees) and all of the air squats. 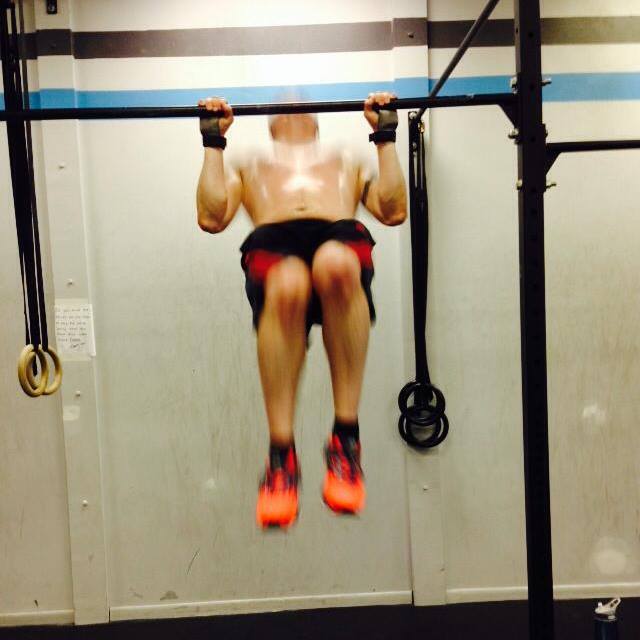 I had intentions of doing it the next year with a 20 lb vest.

That would not happen.  In fact, at that point, I had started a decline that would see me gain about 35-40 lbs and tailspin into a nightmare of darkness.

So, 2 years later, TODAY,  I did Murph. I am still not running (and not sure if I want to tempt fate), so I did a row machine. 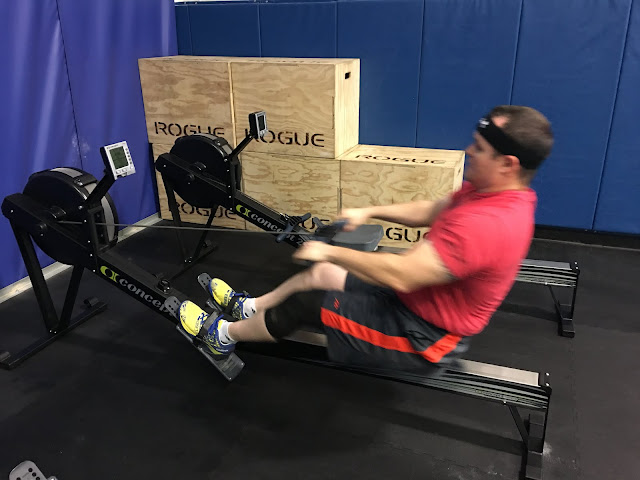 I am carrying too much weight to do the pullups.  Even 4-5 months ago, this would have been enough for me to go get drivethru and drown my sorrows in Mt. Dew.

Instead, today, I did body rows (basically lying on your back and pulling yourself up with gymnastic rings).  It is an easier version of pullups by far.  But you know what, I went.  I sweated.  I didn't focus on my weight and what I CAN'T DO NOW.

What I did today was a first for me in a long time.  Even when I would go to crossfit, spin class, yoga, I nursed a hurt ego.  Or felt like a lesser version of myself whom I was ashamed of.

I didn't feel that today.  I pushed myself and cheered for my other box mates.  They cheered for me.  My body screamed and my face was solid red. I left a sweat angel on the ground (which is a pool of sweat left after laying in waste on the floor).

Listen.  You have two choices.  To live or to die.  Those are your choices.  If you choose the latter, you will know it.  You don't have to put a gun to your head or a rope around your neck to do it.  It happens inside your head long before it happens to your body.  You will start the process by abusing yourself with sugary drinks, bad food, perhaps alcohol, drugs etc.  You will tell yourself you aren't any good for anyone.  That you have outlived your usefulness.

Choosing the former is a different process.  It doesn't happen in one day or one week like choosing to die.  It takes a LOT of hard work to choose to live.  Especially if you have suffered a setback.  You first have to strip yourself naked to the bone (not literally, but figuratively). and face all of the bad habits you have.  All of the BS you have surrounded yourself with.  You then have to make a CONSCIOUS CHOICE to leave it all behind.  You have to stop judging yourself, and get out there and do what you enjoy.  For me it is crossfit.  For you, it may be walking, riding a bike, yoga, water aerobics, anything productive.  Anything.  But productive.

What you need to realize is that there are a lot of people out there pulling for you, hoping you can fly again.  When you are in the 'choosing to die' state, you tell yourself and eventually believe that everyone is laughing at you and enjoys seeing your failure.

When you make this change in your mind, you will feel differently.  The weight that holds down your heart with hatred and anger will lift.  This has a healing effect in and of itself.  Just the conscious shift toward loving yourself from hating yourself.  It is a short walk.  It is also a short walk back.  So you have to remain diligent.

I feel better today.  Yeah, I am not the me of 2 years ago.  But I am me today.  You are YOU today.  There are all kinds of people who envy you today.  So be the best you that you can.  As we get older, this will shift.  But you can't constantly live in the past.  Always look ahead and be thankful for the gifts you have. 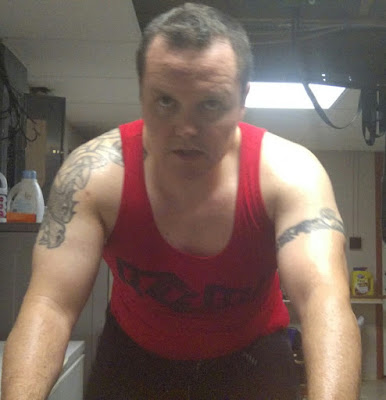 Do NOT accept what you have become... 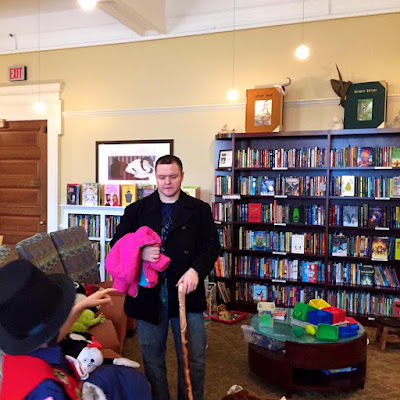 The pit is a deep one.

Nobody will help you out.  Only you can make that decision.

Grab the rope and climb.  The real you is waiting there at the top.
Posted by Unknown at 6:01:00 PM No comments:

A topic that has fascinated me since I was a child is the study of megalithic structures.  The pyramids have captured everyones' imaginations worldwide.  Approximately 10 years ago, a gentleman named Semir Osmanagich discovered that a vegetated hill in Bosnia was actually a pyramid that had been buried in vegetation over the years. 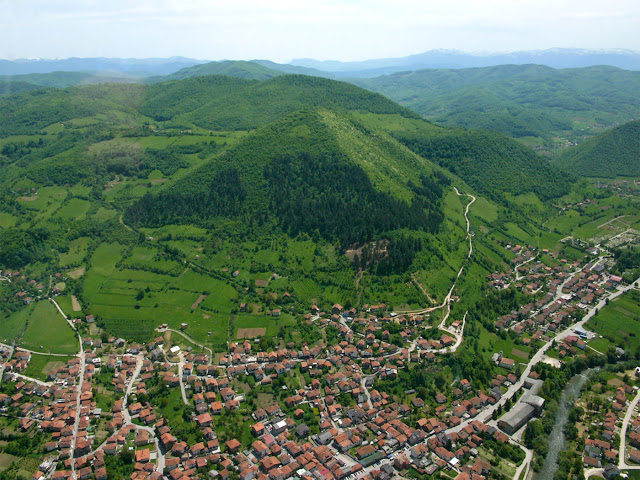 Skeptics quickly shot him down and said he was delusional.  He continued to press on, funding the project himself with income from his business in the U.S.

As years passed, he discovered an underground tunnel network.  To date, he has discovered approximately 6000 meters of tunnels, including great rooms. 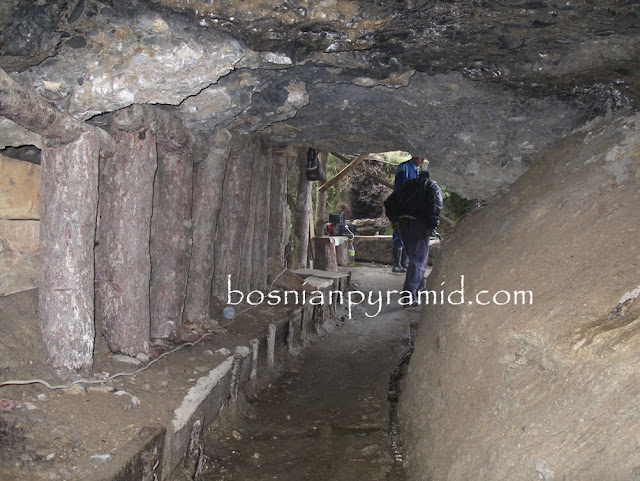 Many of those who have toured the tunnels have claimed that they have experienced healing of various ailments. Veronika Vranko, a 17-year old girl who had respiratory problems, which involved inflammatory cysts that resulted in lung capacity function of less than 1/2 or normal function, even after surgery to her right lung. After a visits to the underground tunnels, her doctor reported that her lung capacity had increased from 47% to 84%.

More and more people continued to report this phenomenon. Dr. Osmanagich, although a visionary, is also a pragmatist.  The healing power of the tunnels was not something on his agenda in uncovering them, but became a topic of interest when it became apparent that numerous cases were statistically deconstructing the theory that improved health and visits to the tunnels were a coincidence.

He employed a team of scientists to attempt to unravel the mystery.  It was determined that the tunnels had a presence of electromagnetism and resonance known as Schumann resonance, which has a frequency of 7.83 Hz.  This was believed to have been the resonance of the earth for thousands of years.  There are reports that, for whatever reason, this began to change around the year 1980 and is now at approximately 12 Hz.

It was also discovered that the tunnel had very high concentrations of negative ions.  The tunnels had a maximum concentration of approximately 60,000 ions per cubic centimeter.  In contrast, the typical concentration in a forest mountaintop is about 1/10 of that concentration.  These negative ions are something we have tried to emulate with air purifiers.  Amazingly, the tunnels have this ability even after being sealed for hundreds or thousands of years.

After studying the research of Dr. Osmanagich, it occurred to me just how far we as a society, a species, have strayed from ancient knowledge. Or how we have been steered away from knowledge that would enable us to be healthy without the use of invasive surgery or medications.

It was Nikola Tesla who discovered alternating current electricity.  This type of electricity enabled him to transmit electricity without wires. He dreamed of a world where his Wardencylffe towers would wirelessly transmit energy and broadcasts.

Although this did not come to fruition in his lifetime, it has been theorized that this is exactly what the ancient pyramids did.  Pyramids exist on all of the continents. Perhaps Tesla uncovered an ancient technology.

Suffice it to say, I see a direct correlation with the aforementioned topics and my recent experience with Regenexx stem cell therapy.  My knee injury is now healing, simply by transplanting stem cells from bone marrow in my hips to my knee.  No magic.  No sorcery or spells.  Simply using the human body's faculties of self-healing.

Stem cell therapy is considered to be experimental.  Controversial.  These labels have been attached by the same lobbies that push pain medications and antidepressants on us.  That encourage us to get a total knee replacement (which is a joint amputation, replaced by an artificial device), rather than have bone marrow extracted from your own body and injecting natural stem cells from that marrow into an injured body part.

These labels have prevented stem cell therapy, at least the version that was performed on me, to be covered by insurance.  This is by design.  As a society, we are completely indebted.  A small percentage have taken the path to financial independence, either by becoming very successful in business, avoiding societal debt,  inheritance, or a combination of all of these.  The large majority are at the mercy of the dictates of the ruling class.  All by design.

We must, as a people, begin to understand the magnitude of this folly, and set about to undo it.  We are at a level of unhealthiness that is unsustainable.  Most of society, particularly western society, is medicating ailments brought about by ingesting toxins, and basically waiting to die.

Like Tesla, we must seek to discover what was once lost, and reimplement it within our society. Like Dr. Osmanagich has discovered, we each must discover our own healing power, inside the tunnels of our own hearts and minds.

I would like to sincerely thank Dr. Semir Osmanagich for allowing me to use his research as part of my blog.  Please visit his website at http://www.semirosmanagic.com/en/